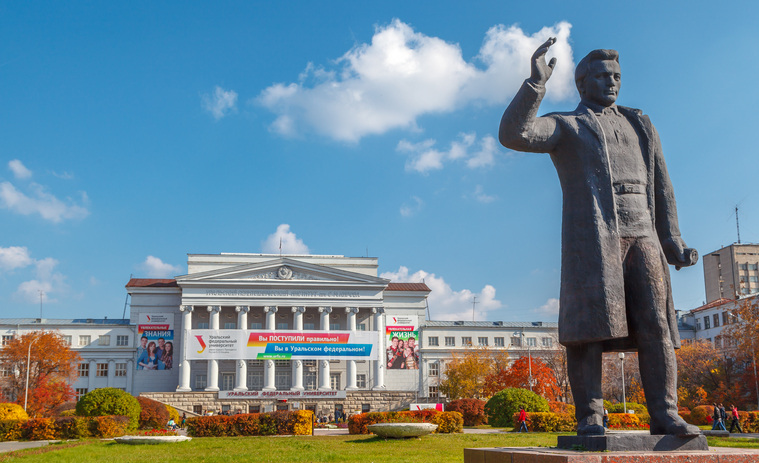 This article explains the outflow of university applicants within the sphere of IT to Moscow and Saint Petersburg on the example of the Institute of Mathematics and Computer Science (IMCS) of the Ural Federal University.

My authorship was formally presented only in two articles but actually I worked on seven more. Mostly exactly as editor, nevertheless some articles consists of my text more than a half. I suppose, their appearance in my blog will be rather honest.

This one was written by me and IMCS director M. Asanov.

In Russia there is one important feature that has vast influence on education and other spheres of life – uneven distribution of population through the territory of the country. According to the Federal Statistics Service, among the population of Russia which is equal to 146,5 mln people, 70% live in the European part, which in its turn equals only to one fifths of its territory.

It is worth noticing that 1/8 of the overall population is accumulated in only two cities: Moscow (12,3 mln people, according to Rosstat data for March, 2016), and Saint-Petersburg (5,2 mln people). This data is official, which means it does not include illegal migrants, and locals of regional towns who travel to these cities every day.

This trend can be consequently transferred to educational processes. Most university applicants from regions of Russia tend to be admitted to higher education institutions of Moscow and Saint Petersburg. Thus, according to the Monitoring the Quality of Enrollment in Russian Universities held by the National Research University Higher School of Economics (HSE), in 2014 share of non-local first year students in Saint-Petersburg was the biggest in Russia – 68%. Moscow took the second place in this list. At the same time, only the 2% moved out from Moscow and Saint-Petersburg to study.

Subsequently, one of the most important tasks of regional higher education institutions in Russia is to keep applicants in their region. Applicants for IT disciplines are not an exception from this trend, and they reflect it very vividly. In 2016 there were eight Moscow and Saint-Petersburg universities offering governmental funding to students among the top-10 in terms of enrollment quality for the group of programmes related to business informatics, seven – for computer science, and again, eight – for information security.

Apart from this, there are more career opportunities for graduates in these cities, which is also a great incentive to stay. According to CNews – one of the most cited and competent web news portals in Russia related to IT, only 17 out of a hundred most profitable IT-companies in Russia have their head offices in Moscow or Saint Petersburg, and out of 30 most profitable – only one.

In 2016 IMCS was ready to admit 210 students to IT-programmes. Average Unified State Examination (USE) score for a one subject was 81,6 out of a hundred. The most popular programme this year was “Fundamental informatics and information technologies”. It attracted 60 applicants, whose average USE score was 87,3. For a regional university this is a very good result, despite the fact that in leading higher education institutions of Moscow and Saint Petersburg (such as Moscow State University, Saint Petersburg State University, Moscow Institute of Physics and Technology, etc.) this score usually varies from 90 to 95.

Yekaterinburg is a non-official capital of the Ural region, a city of an advanced industry and a relentlessly growing population (currently 1,4 mln.). There are quite a lot of IT-companies in the city, which creates good employment opportunities for IMCS graduates. More to this, companies are interested in employing new minds, so they organise various olympiads for students and schoolchildren together with IMCS, and participate in teaching.

Educational process is based on a very strong fundamental training in mathematics. As a result, those who live up to standards of it and manage to stay until graduation (usually approximately the 70%) have very strong competitive advantages in their careers. Also there are established professors working for IMCS, such as Mikhail V. Volkov (one of the few professors granted by the Ministry of Education), or Arseniy M. Shur (one of the world leading specialists in string processing), as well as highly qualified international guest lecturers and professors (for instance, one of the creators of the CSS standard Håkon Wium Lie).

There are also a lot of opportunities for IMCS students to test their skills: regional team programming championships, city individual programming championships, information security competitions. Students are successfully involved in scientific work: they are published in respected scientific journals, they participate in international conferences.

To prepare for IMCS, starting from the 7th grade schoolchildren can attend the School of a Young Mathematician. Also there functions the School of Olympiad Programming, and IMCS holds an annual regional team olympiad for pupils.

However, despite such extensive work, and even though IMCS attracts many bright students from different part of the Ural region, there still exists an outflow of applicants which is quite hard to fight.

In 2016 seven school students of the last year of education won diplomas of a regional round of the All-Russian Academic Olympiad for School Students in informatics, and only three of them chose IMCS, while others left the region. In 2015 16 pupils finishing school won equal diplomas, but only nine stayed at IMCS.

Looking at other good schools of the region, it is possible to conclude that roughly about the half of pupils choose these two regions. However, together with this outflow, there is an inflow of applicants from different parts of the Ural region: many good students still find it reasonable to stay closer to home

It is hard to determine applicants of what specialisations tend to move to Moscow or Saint Petersburg more as too many factors are at play – flows of applicants may often be heterogeneous within one specialization or one region. More to this, such factors as the level of selectivity of universities, their approach to work with applicants, and a terms of education (applicants usually have higher financial ability to pay for education in comparison to applicants from other regions) can be significant. For instance, in Higher School of Economics that offers 34 programmes of education, total number of students from Moscow admitted to the first year of studies in 2016 was 52% out of the overall number — 43% of a total number of students were admitted to places funded by the government, and 59% — to places that were not funded by the government.

Among the students who were admitted to the Faculty of Computer Science that offers programmes “Applied Mathematics and Informatics” and “Software Engineering”, Moscow was represented by the 44% of first year students – 32% of students whose education is funded by the government, and 56% of those whose is not.

On the other hand, in Moscow Institute of Physics and Technology that only offers education in mathematics, physics, and informatics, the number of students from Moscow admitted to the first course rarely exceeds 20%, which, however, might in part be explained by its location in Moscow region.

Consequently, the only thing which is certain is that Moscow and Saint Petersburg remain attractive for applicants from all over Russia, mostly because of the brands of universities there, and bright career prospects. Are other motivational factors significant? Do IT applicants differ in their behavior? Both questions are open for discuss.

Link to the article

Forward to the main page